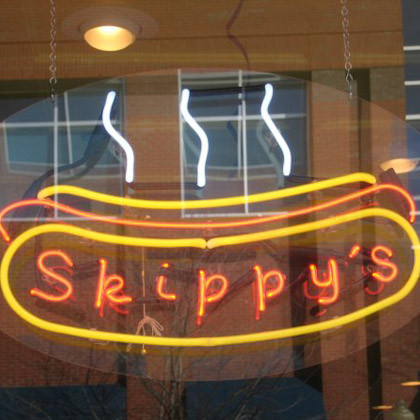 Skippy’s has been serving delicious hot dogs in pretzel rolls and hand-cut french fries since 2002. We have been open in our downtown location at 624 West Fourth Street in Winston-Salem since February 2007.

Skippy’s owner Mike Rothman became inspired to make soft pretzels after he moved to North Carolina in 1994. While widely available and very popular in his home state of Pennsylvania, authentic pretzels could not be found in the Winston-Salem area. Mike experimented with several recipes and took lots of tasting trips around Pennsylvania before finding just the right recipe.

By the way, Skippy’s is named for a chubby little dog with a bad leg who didn’t live quite long enough to see her people achieve much success. Her name was actually Bear, but she was a loving and brave Schipperke who deserved to have a restaurant named in her honor.